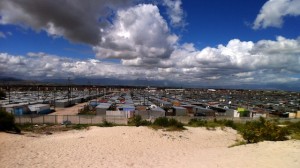 Blikkies…as far as the eye can see

Blikkiesdorp, or Blikkies, as the locals call it.  We’ve spent the last two days there and I still don’t know what to say.  My heart is broken and my heart soars.  I’ve laughed and cried more in the past two days than I have in the last two months.  I’ve met some of the most amazing people, who carry on in such hard, hard circumstances with more grace and more heart and more determination than I think I could ever muster and do so much with so little.  And they think I’m wonderful because I came to see them from America.  Let me tell you, I got the better end of this bargain, without a doubt.

What can I say about this?  I am torn in so many directions.  One way is to tell you about the conditions–the tiny metal buildings that human beings are expected to live in.  To call them buildings is a stretch.  Shacks is what they are.  I’ve seen storage sheds built to hold lawnmowers that are better constructed and more weathertight than these.  When the wind blows, sand blows in.  And the walls are made of corrugated metal, as are the roofs.  There is zero insulation.  Inside, it’s cold in the winter (even now, when it’s spring, you wear coats indoors) and blazingly hot in the summer.

These buildings are meant to house children. 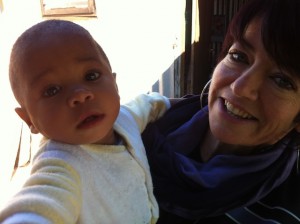 This baby that learned to walk while we were at Blikkies 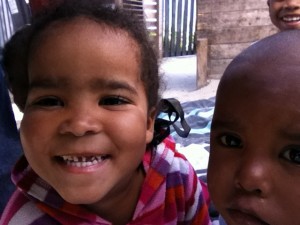 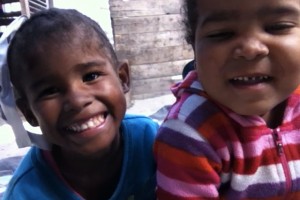 And yet these substandard homes hold such dignity, such perseverance, such strength of character that I stand humbled and amazed.  These people are wonderful, and I am lucky to know them.  They invited me into their homes, into their hearts, into their confidence.  They give of themselves so unselfishly every day and I can only stand amazed.

Bern and Ashley are residents of Blikkies.  Ashley is a contractor, a computer whiz and a jack-of-all-trades.  Bern is a mother and a community leader.  She is the unofficial mayor of Blikkiesdorp.  She helps the residents with their problems, as much as she can, she is constantly meeting with community members and helping them.  She runs herself ragged.  In addition to her own child, she has taken in several children who are not her own, because their mothers are hooked on drugs and alcohol.  She has gotten no help from the government to help feed these six extra children for these nine months that she has had them.  Ashley works as much as he can, but money is extremely tight.

Bea is a social worker who works for Novalis Ubuntu Institute.  She has a passion for Blikkiesdorp, and even though she has not received a salary in months, continues to work on their behalf.  She has managed to raise some money, and she and Bern have cooked up (no pun intended) a scheme to feed children in Blikkies.  Once a week, volunteers cook up vats of soup with plenty of vegetables and some meat.  These are delivered to Bern’s house where they are warmed up for the children.

The children line up, some 300 of them, to get the soup and the two slices of bread that they are given.  These children are the ones that Bern has said are the most underprivileged in Blikkies. 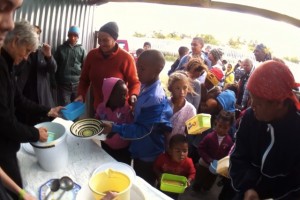 It is eerie to see these children, so good, so solemn, so quiet.  I am used to American children, who would be rambunctious and hard to control and loud.  These children chatter amongst themselves, but they line up as they are told, they recite the Lord’s Prayer to bless the meal without complaint.  They thank the workers who give them the meal, with some prompting.  Their eyes are somber.  Their small bodies are childlike, but their eyes are older.

It is only after all the children are fed that Bern feeds her own children.  While they wait, Bern’s children sit quietly on a blanket in the small, sandy space between two Blikkies (Blikkies is Africaans for “tin cans”, and is what the residents call the metal shacks).  I have never seen children sit so quietly for so long.  Especially hungry ones.  But they wait.  Finally, the latecomers satisfied, Bern’s children at last get to eat. 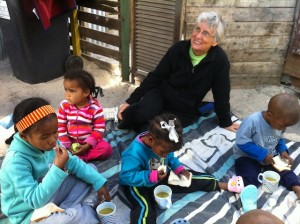 A bowl of watery split pea soup with carrots and potatoes and a little meat, and two slices of white bread made up this meal.  There were no complaints from the children, no “I don’t like that” remarks.  They know this is what there is to eat, and they either eat that or go without.  From looking at the people, there are too many times they have to go without, so they eat.

I go back to my warm, beautifully appointed bed and breakfast and bawl my eyes out.

The next day was back to Blikkies, this time to take care of the adults who work so hard.  Bern and her neighbors, Louise, Hillary and Belinda are to take tea with us.  We bring the tea and cookies and oranges for the children.  Bern brings out her nice set of matching mugs and sugar bowl and creamer set and insists that we, her guests, use them, while she and her family and friends use the everyday mugs.  We have tea and chat and play with the children.  We do a session of healing touch and a hand massage for the ladies.  It is lovely and relaxed and fun. 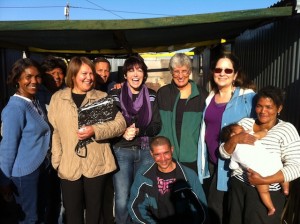 I come home and still cry because it is so difficult for them.  Why is my life so easy and theirs so difficult?  I cannot answer that.  It is not because I am a better person.  Luck?  What a lousy answer.

Robin says that they are advanced souls come here to teach us powerful lessons.  That is hard to accept, too.  Maybe that is so, but I do not want to bear the grief and the guilt of turning away from this.  I have to do what little I can to help them.  I have to.  I have no choice.

I don’t know what that means yet, what forms that takes, but it is imperative to me that I do something to help, in some small way.

These children deserve to be fed.  My God, all of them deserve to be fed.  They deserve decent housing.  I have never seen such conditions.  This wouldn’t be allowed in the US.  But these people were placed here, by the government, and told this is temporary.  They’ve been there nearly five years.  Five years!  And this in a country where it is a Constitutional imperative that every citizen gets a house.  Bern told us she’s been on the waiting list for a house for 23 years.

It makes me so angry, the broken promises, the expectation that these people must do without, in such a rich country as this one.  Multi-Million dollar homes overlooking the harbor, and thousands living in Blikkies.  Makes the head spin.