We’re back from day one in South Africa.  First thing, we went to the grocery store.  Everything is different!  The produce, the brands, even the names that some of the foods are called by.  I could have spent hours there just looking at all the products on the shelves, but we were on a mission.  We picked up a few things like cereal, yogurt, fruit and coffee and we were on our way.

We went to Novalis to have a wonderful lunch and meet some of the staff and friends. Lunch was great, and so was the company, and the setting.  What a beautiful place.  We’ll be back there several times during this visit. 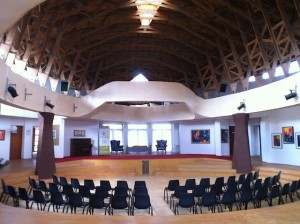 Then we were off for an afternoon of sightseeing.  Martin drove, for which I was thankful–that I didn’t have to!  You drive on the left here, and the driver sits on the right side of the car–so everything is backwards.  We knew that, of course, but knowing and doing are two entirely different things.  There are so many things about driving that are automatic and are done without thought, so having to do them consciously while unlearning the old ways of doing it while processing the things that are going on in the moment, is so hard!

Our guide for the day was Mzwai, whose name I’m probably misspelling.  He is a friend of Robin’s through her work at Novalis, and they chatted a while about friends they have in common.  He navigated from the front seat while Martin drove.  Robin and I got to sit in the back and take in the sights.

We got in a few good laughs at Martin’s expense as he repeatedly, again and again, hit the windshield wipers every time he meant to hit the turn signal.  It’s amazing how many times you turn on your blinkers, and every time, windshield wipers.  Poor Mzwai kept his head, but Robin and I were giggling in the back seat.

Those narrow roads, and staying on the left, and people tailgating because we weren’t going fast enough for them…I would have melted down right then and there, but Martin kept a cool head and did very well.  Bigtime props to Martin. 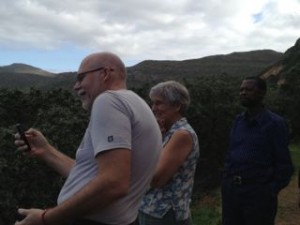 Me in front of the most gorgeous view

My first impressions are that it is really beautiful here.  There are so many different landscapes–ocean views to mountainsides and everything in between.  The plant life is very different.  Nasturtiums grow wild here, as do Calla Lillies.  We saw several Birds of Paradise plants, which I’ve never seen outside a floral arrangement.  Many of the flowers and plants I don’t recognize at all.

Another thing I noticed right off is the abundance of walls and fences.  There are lots of walls and fences.  I’m trying to remember if we have that many and I just don’t think about it because I see them all the time, but it seems like they’re everywhere!  Not just at the really fancy expensive looking places, either. 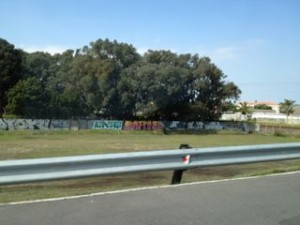 We saw lots of different types of homes, from zillion-dollar mansions to tiny little shacks that were smaller than a one-car garage.  Some places had roofs that were heavily patched with random pieces of corrugated metal, and some places had tarps that were used to create additional shelter.  We saw a man in old clothes, sitting by the side of the road, cutting pieces of bamboo to sell while his children watched nearby. We saw crowds of schoolchildren, out of school for the day, all heading home in their school uniforms.  We saw whales.  We saw so much! 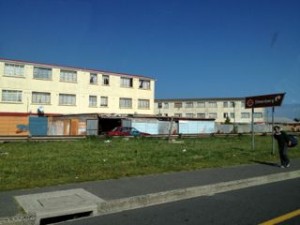 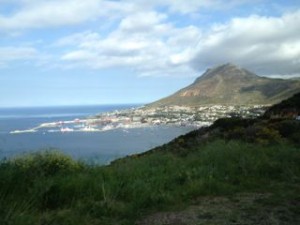 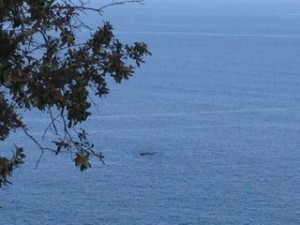 Tomorrow, I think, we are going to Blikkiesdorp.  We’ll see a lot then, as well.