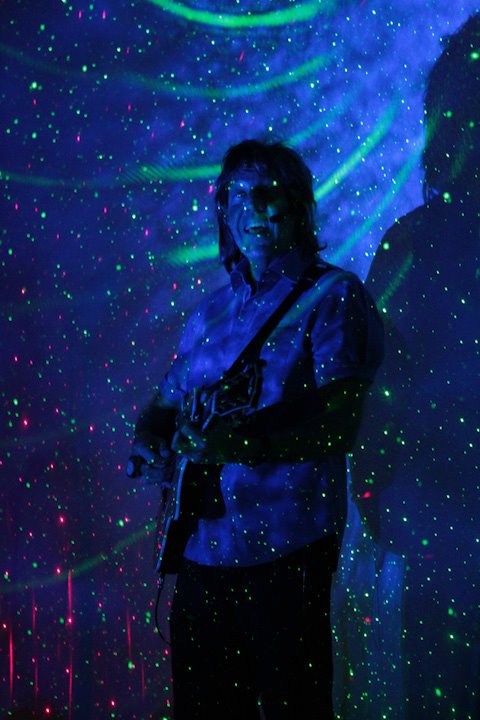 One of the first things I did at Unity Village was walk the labyrinth.  On the way in, I walked carefully up against the inside edge of the path, as though I was on a giant, curving balance beam.  It was slow, and difficult.  On the way out, I decided not to do that again, and instead walked centered in the path, which was much easier.  Was this an object lesson on balance versus being centered?  I don’t know, I just know it felt easier physically to stay centered than to insist upon perfect balance (which I was unable to keep through the whole exercise).  It got me thinking.

I did a lot of thinking in the next few days.  I wrote in my journal, read a new book about moving through fear, and spent lots of time sitting in various garden spaces and chapels, meditating and contemplating.  It felt good to be peaceful, and I tried not to worry about where and when things would happen.

The conference attendees got lots of free time, a couple hours each day.  So I got to sit and talk with my friends quite a bit, and shared many meals with them as well.  It was good to laugh and talk with Robbin, my new and dear sister, and with Martin and John, as well as new friends from all over the place.

All around me, people were sharing their passions.  Pat Williamson, a minister that we’ve known for a very long time and have not seen in years shared how passionate he is to have more youth events at Unity Village.  Robbin was sharing a similar passion, about the continuation of the conference events, and trying to figure out how to ensure that funding was there to do this.  John was sharing his passion for helping foster kids who have aged out of the foster care system, and talking about his plans for starting a non-profit to help.

Martin was sharing his excitement with me about being in small group with Robin and in rooming with John Jacobs from South Africa.  He showed me the Google map of Riviersonderend, and even the street view, which we were amazed that there would be street view of a small town so far across the globe.  Makes us realize what a small world it really is (although flying across it will make it seem again like it is indeed a very big world).  John and Martin found the address of the Empowerment Center and on street view, John was amazed and delighted to see that his mother is standing outside in the yard.  It is amazing that we can see this on the Internet.  What a wonderful world we live in.

One evening at dinner, Robin comes to sit with us and eat, and asks me, “So, how do you feel about going to South Africa?”  Caught completely flat-footed, and with a million questions flying through my head, I stumbled out some answer about being open and curious, but needing to know a lot more information before I was ready to just head out.  A pretty lame answer, truth be told.  I wanted to be more bold and adventurous, but instead the voice inside my head was asking, “Do I need a visa to get in the country?”

Robin looked underwhelmed.  And I felt overwhelmed.  All around me, people were feeling, and sharing, their passion and their excitement.  And all I could do was admire their commitment and their energy and wish that I had some of my own.

The week was drawing to a close.  We went to a concert by Karl Anthony, the musical guest at the conference.  He did a beautiful event lit by lasers that made the room look like it was afloat in the nighttime sky, with beautiful points of light that looked like stars but that formed beautiful patterns in the starfield.  During the concert, Karl Anthony shared that he was planning a trip to South Africa next year.  Robin’s gotten to him, too, I thought.

All around me, passionate people committed to passionate projects.  And here I sit.  One of the exercises that the youth had done during the conference had been to pop balloons.  I wasn’t in the event, but I couldn’t miss the distinctive sound of balloons popping, and I wondered if I was going to be the pin in Martin’s balloon of going to South Africa.  Because it was all very nice to see South Africa on Google street view, but going there is another thing entirely.  There’s a whole lot of details that have to take place before you just go off to some place like South Africa.  And there seemed to be a whole lot of visions going on, but everyone seemed pretty short on details.  I was steeling myself to be the shot of reality that throws cold water on everyone’s dreams.  I was preparing to be the pin that popped the balloon.

I talked with Robbin, my sister, and shared how I was feeling, and she agreed that there needed to be some grounding going on, and suggested that instead of popping the balloon that was Martin’s dreams, maybe I could be the string of the balloon.  A balloon without a string floats away and is lost.  But a balloon with a string is still flying, but is attached to the ground and brings joy.  “Be the string,” she said.

I can do that.

The event was ending, and I walked the labyrinth a final time, wondering where the curving path of my life was taking me.